Well it's not really but it feels like it with temperatures at 12C and bright sunlight. Anyway the crocuses are out in force this afternoon. Crocus sieberi 'Ronald Ginns' looks particularly gorgeous. Just what the doctor ordered. It may not be the cheapest around but it certainly stands out. Raised by Ray Cobb from nearby Nottinghamshire - him of the yellow snowdrop that I don't have - they have increased measurably since first planting two years ago. There's nothing better on a sunny day than a field of crocuses. I don't have that much of an area, only a front lawn full of self sown seedlings. 'Ronald Ginns' however is in my biggest planter underneath the deciduous Viburnum Juddii. 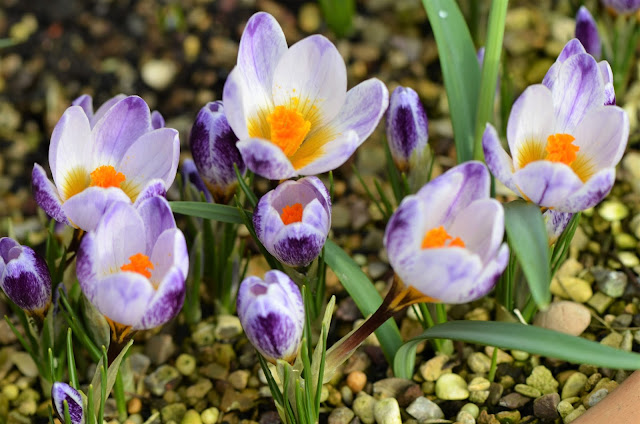 It is always a relief when the snowdrops pop out of the snow untouched. Indeed some cultivars are desperately in need of splitting for next year. 'Uncle Dick' has clumped up and he is a handsome relative. 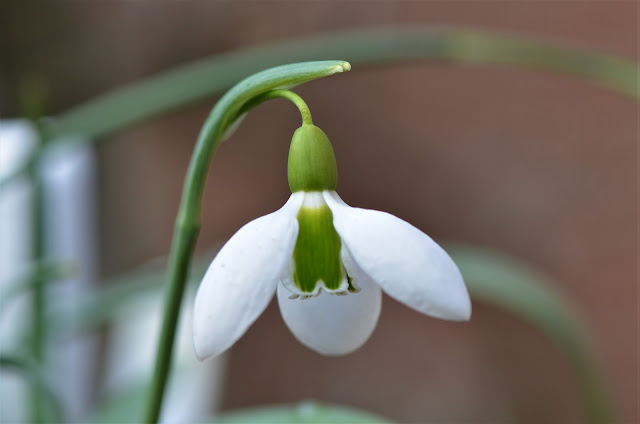 The yellows threaten to steal the show. I was a bit sniffy about Galanthus nivalis 'Blonde Inge' because, of all things, its ovary is a rather ordinary green. Churlish of me. There's such a freshness about it and for a nivalis it's a decent size. A charmer in the border. 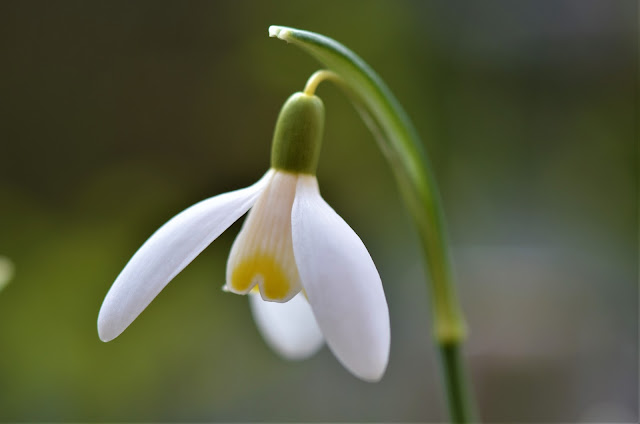 Galanthus plicatus 'Wandlebury Ring' is a larger, taller variety exhibiting a little lateral growth at the moment. The yellow stands out. I did read a well known American blogger on snowdrops describe the British snowdrops as rather lacking in yellow compared with her own State. She put it down to the lack of sun. As she had been visiting a snowdrop garden in Northumberland she might have been unduly influenced by England's northernmost counties. I get the same feeling when visiting there in June, July, August ,,, Whatever, the yellow snowdrops are yellow even after our dull and dreadful winter. 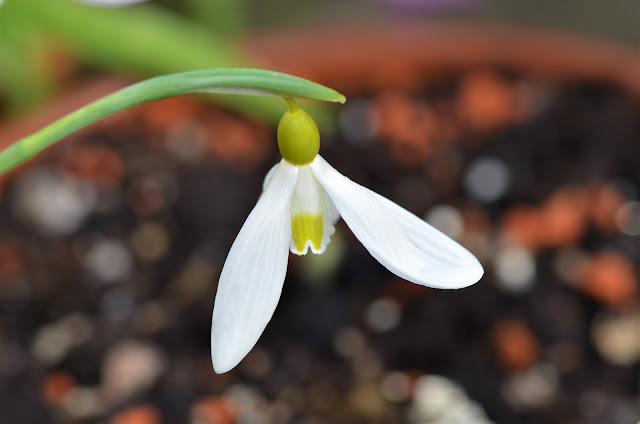 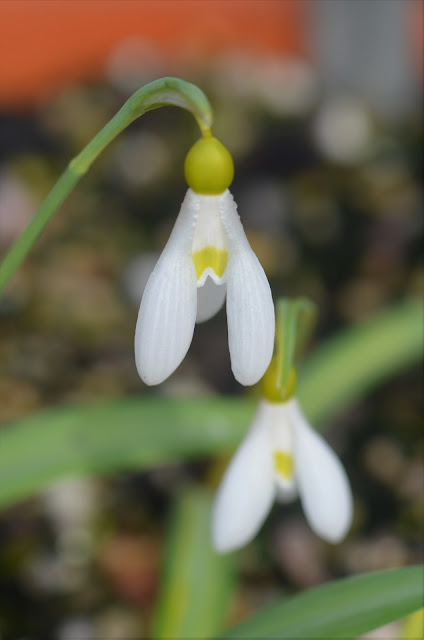 Now an apology. I featured 'Trymming' here at the beginning of February. Well it's still in glorious bloom but it's not 'Trymming', it's 'Trymlet'. I only read the top of the label and charged right in. By the magic of  technology I shall now proceed to change the name to demonstrate my infallibility. Trouble is I'm exceedingly fallible. If you want a spectacular spotted snowdrop that clumps up with almost magical ease, and lasts longer than a film star's coiffure, go for 'Trymlet'. If you want 'Trymming' read on. You can see that both snowdrops are very similar being bred from the popular 'Trym'. They both clump up well, 'Trymming' at present being a little shorter with bigger flowers. 'Trymlet' is the more charming perhaps being earlier, taller and with a mass of smaller though showy flowers. Both very eye-catching. Mind you, and I win a prize every time for being decisive, the two-tone markings on the petals could just swing the vote. A bit like promises on red buses. No, I'll stick with my first choice. 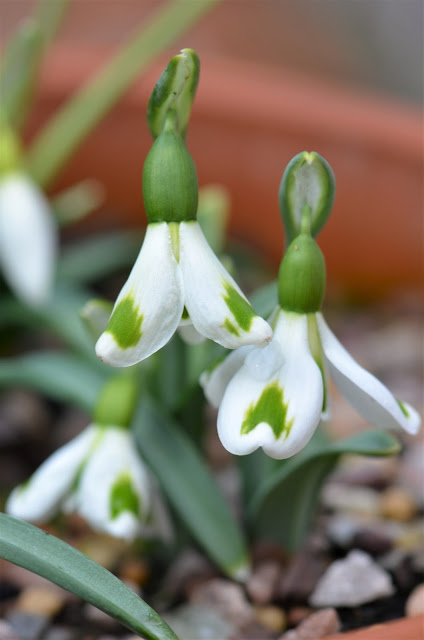 Finally a new look at 'Flocon de Neige'. It looks fragile but is not. Gazing downwards the six perfect petals are spread out to, well, perfection, and adopting a worm's eye view, it looks pretty good to all God's creatures. 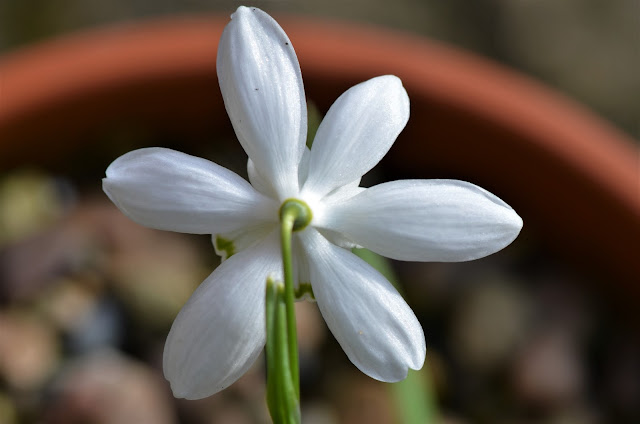 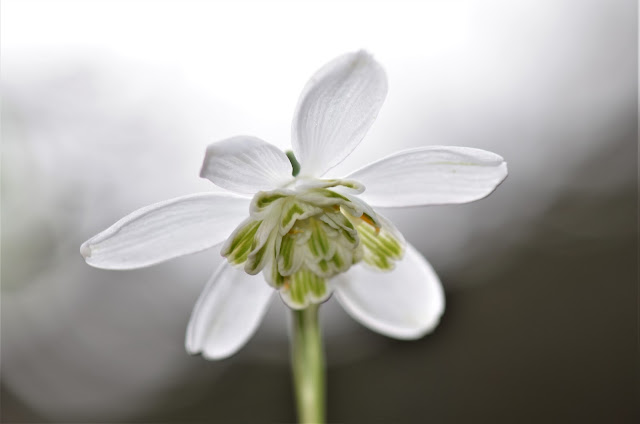 at March 05, 2018
Email ThisBlogThis!Share to TwitterShare to FacebookShare to Pinterest
Labels: My Garden, Snowdrops