On one of the best known sites for snowdrops Galanthus elwissi  'Remember Remember'  is noted for its inability to remain upright in the face of frost. Also for its inability to increase. It's mild at the moment so I took the opportunity to photograph the flowers opened out, revealing the heart shaped inner green. This is the second year here and it has increased very well indeed so there are five flowering single flowered stems and a few shoots. I would say it is fertile enough. But for some reason it is late in flowering. I had great hopes of it being in flower for the 11th of the 11th, Armistice Day, Of course, the thing with these early flowering varieties is that one notices them precisely because they are early bloomers. Not so here for the snowdrop is a handsome sight, standing proudly in a garden rapidly being denuded of colour as the gloom of December settles in. The petals can have a dash of green to the base. Mine have none. Nice though. It was discovered by John Morley in his garden in 1992. John is responsible for the blissful North Green Snowdrops catalogue. Download it and dream away. One final word, the variety is often grown under glass because of its tender nature. I grow it in the most sheltered part of the garden by a south facing wall. 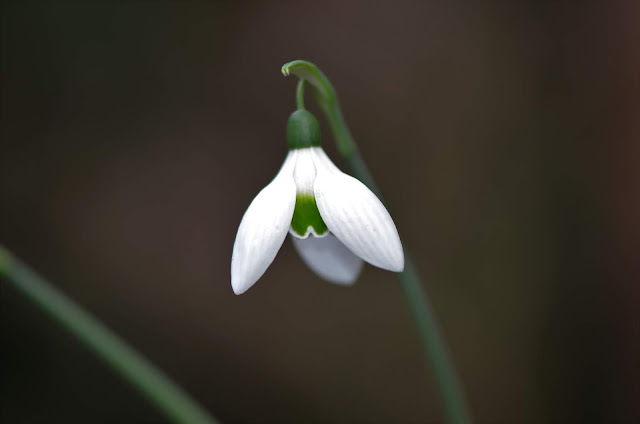 at December 12, 2018
Email ThisBlogThis!Share to TwitterShare to FacebookShare to Pinterest
Labels: My Garden, Snowdrops