Visiting Brodsworth Hall three or so years ago I was drawn to a small clump of over-sized snowdrops at the front of their rockery. The gardener told me the name, I nodded sagely and promptly forgot it. Until in November 2014 I remembered and purchased the snowdrop. Galanthus "Mighty Atom" is well named though detonating only in the imagination. It is one of the family known as Mighty Atoms, on account of their being small of stature and big of flower. The bulb originated in the well stocked garden of John Gray, being collected in 1952. A number of seedlings have stemmed from that discovery and I have a few including "Bill Bishop" and "Little Ben", to be featured shortly. The globe-like flowers of "Mighty Atom" are most fetching even given a solitary flower sticking out of a clay pot, though the thickening foliage indicates more for next year! The flower will develop as the days progress and I intend to retrospectively add images to show this. 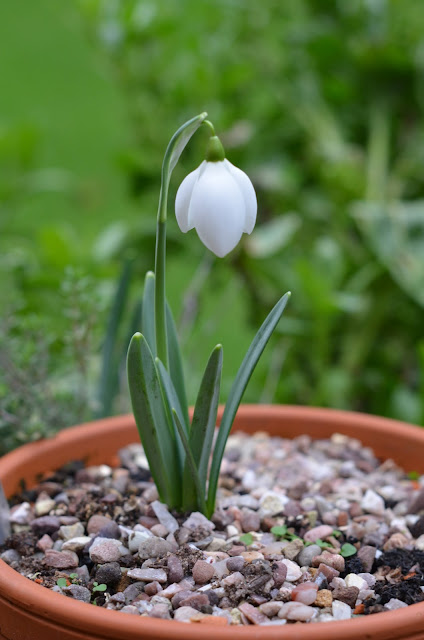 at January 26, 2016
Email ThisBlogThis!Share to TwitterShare to FacebookShare to Pinterest
Labels: My Garden, Snowdrops